An Islamic Analysis of the Grameen Bank 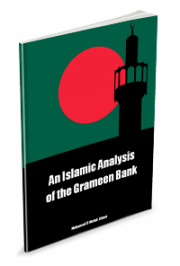 « Muslims should be at the forefront of microfinance ».
Mohamed El Mehdi Zidani

This book analyses the Grameen bank model in depth, describing the key success factors of the Nobel Prize awarded bank.

However the purpose of this book was not only to describe Grameen model, but also to study it from an Islamic perspective. Therefore the book explains to what extent the Grameen Bank contradicts Islamic principles, on an economic and on a social level.

The last part of the book aims at giving alternatives, beyond mere criticism, introducing a new Shari’ah-promoting model: the Positive Circle.

The Grameen Bank is a microfinance organization and community development bank started in Bangladesh that makes small loans (known as microcredit or Grameen Credit) to the impoverished without requiring collateral. The author has analyzed the functioning and key success factors of the Grameen Bank in an effective manner. He has examined the reasons due to which the functioning of Grameen bank is not Islamic. He has seen the Islamic insides for Microfinancing and compared with the insides of Grameen Bank and developed an approach for alternative model. He has provided excellent examples of alternatives for developing Islamic microfinance models.