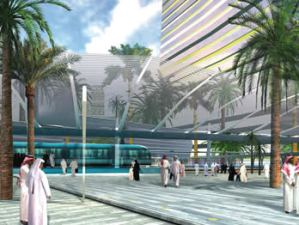 It will be the Middle East’s first financial district on a scale, and of regulatory and technological standards, to match the major global financial centres.

The intention to construct the world’s first major financial district of the twenty first century is the latest stage in what is already a carefully planned and implemented programme of financial modernisation by Saudi Arabia. It will follow the successful launch of :

The master plan for the King Abdullah Financial District will be completed by the end of the year. Construction will begin in 2007 and will create thousands of construction and related jobs over an intense three year period of building and development.

The King Abdullah Financial District is designed as a state-of-the-art and fully self contained centre for doing business and facilitating investment and enterprise in the Kingdom and, in due course, in the wider region.

Many of the world’s major banks, financial institutions and professional service companies – already operating in Saudi Arabia – have indicated their intention to locate in the District in order to play a major part in the diversification of the world’s major oil economy.

The King Abdullah Financial District will be the headquarters for the Capital Market Authority (CMA) and the Stock Exchange (Tadawul), and for financial institutions and other service providers such as accountants, auditors, lawyers, analysts, rating agencies, consultants, and IT providers.

About the Capital Market Authority (CMA)

The Capital Market Authority was established by the Capital Market Law, issued by Royal Decree No. (M/30) dated 2/6/1424 H (16th June, 2003). The CMA is a government organization with financial, legal and administrative independence. It reports directly to the Prime Minister.

The CMA functions are to regulate and develop the Saudi Arabian Capital Market. It issues the required rules and regulations for the implementation of the provisions of Capital Market Law aimed at creating an appropriate investment environment.

The CMA enjoys authority to :